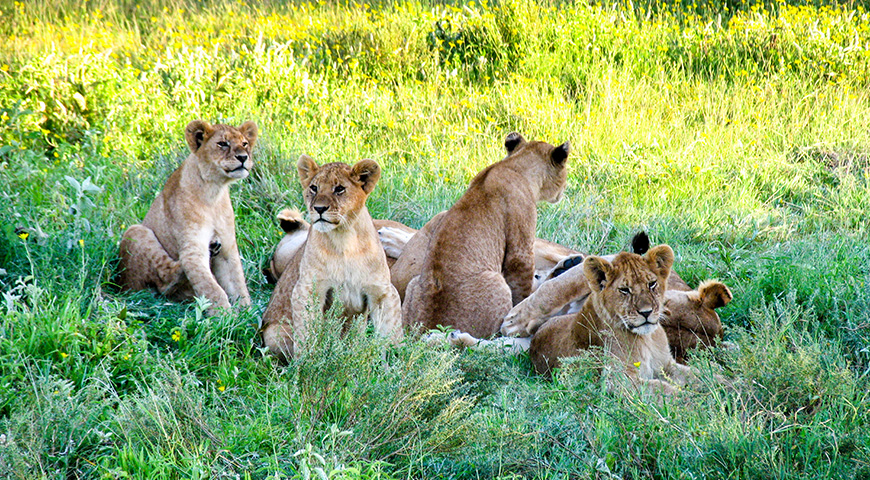 Northern Tanzania is the best known region of Tanzania and the easiest place to quickly see large amounts of animals.  With sensational school-boy geography on show all around (the Rift Valley escarpment, Soda lakes, the Ngorongoro Crater  and Highlands and the Serengeti plains) it’s massively rewarding to explore over a week or so with a private vehicle and guide.

In our opinion, Serengeti is the lynch pin on which to hang your safari.  Get this bit right and build the rest to fit.  With massive regional diversity the separate regions of the park come into their own at different times of year, but excellent game is guaranteed year round.

Tarangire, Ngorongoro and Loliondo are also worthy of proper time and exploration beyond the obvious hotspots. Lake Manyara can be crowded near the main gate and merits a quick look at the northern end, but is worth more than that the further south you go.  Even Arusha National Park, which encompasses the lower slopes of the 15000 ft Mt Meru deserves consideration, possibly as a warm up act for a night or so, while recovering from your flight.

In addition to the premier league of Serengeti, Ngorongoro, Tarangire and Manyara, Northern Tanzania has extensive and little visited wilderness areas that are magnificent places to spend time with a light mobile safari camp if you like the idea of a bit more freedom and the chance to walk and escape the crowds.

These are places such as the northern rift valley in the region of Lake Natron, where you’ll find the active volcano Ol Donyo Lengai, the Gol Mountains and the nether regions of the Ngorongoro Highlands where they lead down to the shores of Lake Eyasi, home to the Wahadzabe people.