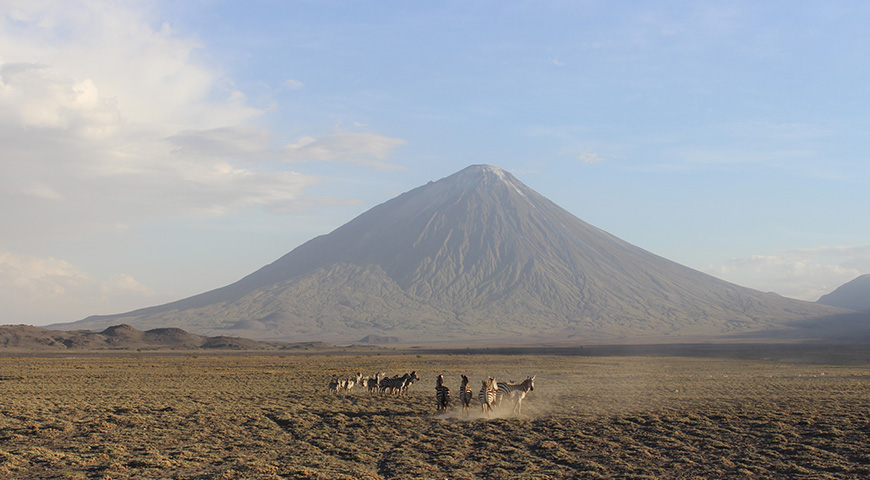 South of Lake Natron in the eastern rift valley of North Tanzania, lies Mount Ol Doinyo Lengai (locally regarded as the sacred Mountain of God in the Maa Language), an active volcano. At 2878meters, Mt. Lengai is the only known volcano in the world that sometimes erupts natrocarbonatite lava, a highly fluid lava that contains almost no silicon. Natrocarbonatite lava (most fluid lava) is also much cooler than other lavas.

The eastern horizons dominated by Kilimanjaro and to the west the forested escarpments and hills comprising the western slopes of the Rift Valley. Every seven years Lengai erupts and plumes of smoke billow out of the crater. Volcanic activity on the mountain has been observed from as far back as 1883. The Oldoinyo Le Ngai mountain reaches a height of approximately 2878 metres.

It is possible to walk across the crater floor. The ascent of Oldoinyo Lengai is demanding on account of the day time heat, lack of water, steep and unsuitable slopes of ash and crumbly rocks and considerable height gain. Normally you can start ascending to summit early in the morning and reach to summit at sunrise. Short and a warm jacket are suitable for ascent, also long trousers are good as the summit before dawn can be cold. Our access route from the North West allows an early descent to be made from the summit in the morning shadow.